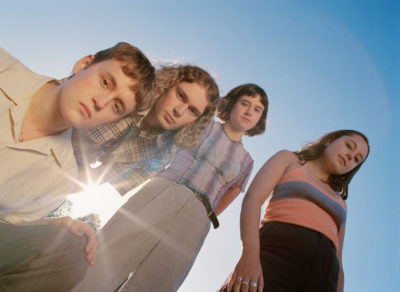 It is with great joy that today we announce The Orielles‘ return with their second album ‘Disco Volador’.

The band’s brand new single ‘Come Down On Jupiter‘ is the first from their new offering and is accompanied by a beautifully shot video directed by Rose Hendry and filmed at Arments pie & mash shop in Kennington, London.

Talking about the video, Rose said:

“When I first heard the track I was immediately transported into some sort of mystery melodrama from another era, with a strong dose of something psychedelic. This was my starting point, alongside an image by photographer, Ralph Gibson, of a cup of tea sitting on a beige table, bathed in warm sunlight with a plastic spoon resting against the lip. I enjoyed the idea of centring the video around an incident with a cup of tea – that felt dramatic to me – something “mundane” becoming something dramatic. I wanted to encapsulate the playful psychedelia in a psychological and structural way as opposed to the ‘pastiched to death’ VW campervan kind of way. Add to that toast and the rest developed from there.“

Esmé from the band added about the track itself:

‘Come Down On Jupiter’ is as much a song as it is a narrative that soundtracks a space flight, right through from the ominous introductory sounds of the grand piano to the Lizzie Mercier Descloux-esque ‘thrift shop cowboys’ group chants towards the end, which diffuse the tension of the wig out preceding it.”

WATCH ‘COME DOWN ON JUPITER’ HERE:

‘Disco Volador’ sees the 4-piece push their sonic horizon to its outer limits as astral travellers, hitching a ride on the melodic skyway to evade the space-time continuum through a sharp collection of progressive strato-pop symphonies.

“Its literal interpretation from Spanish means flying disc but everyone experiences things differently. Disco Volador could be a frisbee, a UFO, an alien nightclub or how you feel when you fly; what happens to your body physically or that euphoric buzz from a great party,” suggests bassist and singer, Esme. “But it is an album of escape; if I went to space, I might not come back.”

Voyaging through cinematic samba, 70s disco, deep funk boogies, danceable grooves and even tripping on 90s acid house, Disco Volador is set to propel The Orielles spinning into a higher zero-gravity orbit. Written and recorded in just 12 months, it captures the warp-speed momentum of their post-Silver Dollar Moment debut album success; an unforgettable summer touring, playing festivals like Green Man and bluedot, Disco Volador’s library catalogue vibes stem from a band lapping up and widening their pool of musical discovery whether nodding to Italian film score maestros Sandro Brugnolini and Piero Umiliani, or the Middle Eastern tones of Khruangbin and Altin Gün.

The band return to the live forum next year playing their UK biggest shows to date in February including London’s Electric Ballroom.